Old School Grill is just what this neighborhood needed. In trying to describe it, we just kept coming up with pale comparisons. It's what you wish Waterloo or Opal Divines would be, but never are. The food is thoughtful and well-prepared, like Cover 3, only without the gentleman's lounge vibe.  Or like Jack Allen's Kitchen, but you don't have to drive to Oak Hill for it. In the end, though, Old School Grill is really just one-of-a-kind.

Old School is an inviting kind of place with corrugated metal sheeting on the walls and a bit of the "new rustic" decor going on. You'll be seated and waited on by young kids in Old School t-shirts, that have the training of a four-star restaurant staff. No hipster slacker kids here who make you beg for a refill or cop an attitude when you deign to ask a question about the menu. They are attentive and enthusiastic.

Old School's menu reads like someone's (mine, maybe?) dream menu. It lets you know the thought that was put into each dish. You know immediately there's an experienced chef behind it, but the food is the most down-to-earth comfort food. It's kind of "fancified" home-cooking. Or maybe it's what the chef most likes to eat at home. I'll just say that I plan to work my way through a large part of that menu, and have gotten off to a good start at that goal.

We were there for the first time on their sixth day open and have been back since. All of the owners stopped by to make sure we were happy. Danny told a cute story about bartering recipes with a little Mexican woman for the perfect creme brulee we had for dessert. His father, Dan Parrott, stopped by to talk to us after we were stuffed to the gills and bought us a Pimm's Cup and sat down with us. His passion for, and experience in, the restaurant industry were evident as he told stories about how he ended up in Austin opening first the Old School BBQ bus, which sold award-winning barbecue from an old school bus they named "Big Momma" and now retiring the school bus (not permanently) to open Old School Grill. He was beaming when we said how much we liked the creme brulee, then brought out the pastry chef who had made it and, giving her a big ol' bear hug, talked about his staff like a proud papa.

He told us another diner had complained that his staff was all standing around at the pass. We'd noticed it as well, but just thought they looked ready to pounce when the food came up. Dan proudly exclaimed "I don't have any heat lamps back there!" That's evident in how freshly prepared the food tasted. (Not to mention, I'm finicky about my food temperatures).

We've now tried several of their offerings, and all have been outstanding.  The first entree I had was their  Mac-N-Cheese wedge. That's right, I said Mac-N-Cheese WEDGE. How could I not order that???!!! The menu tells you, "this is not your grandma's mac-n-cheese". They bake it with five Italian cheeses and other Italian herbs, then serve it with a creamy garlic sauce. Oh. My. Here's a pic.

Bill felt like trying the Texas Two Thep, a double stacker of half pound, ground fresh, steak burger with sriracha, jalapenos, and a fried egg. Also of note, the fries are fresh cut and double blanched. I told you they know their execution here.


We ended with the creme brulee, which was slightly less custard-y as a traditional creme brulee, but much creamier. This is made in-house with the afore-mentioned legendary recipe. 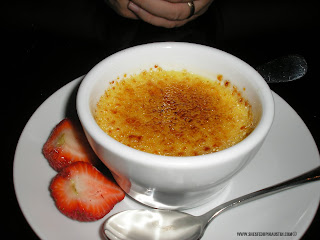 The next time we went,  I had the chicken fried new york strip, which was simply the best chicken fried steak I've ever had, served with the best cream gravy I've ever had. Tender, seasoned perfectly, and a total steal at $11. Get it before they figure out they can charge a lot more for this. 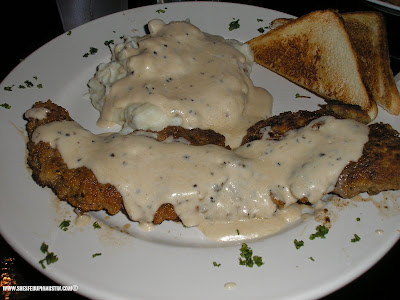 Bill had the Philly Cheesesteak, which he enjoyed, but could have used more cheese... 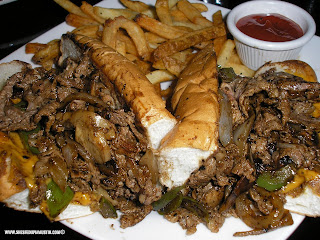 We ended the meal with the sublime chocolate malt cake, which we agreed was one of our top three chocolate cakes of all time. 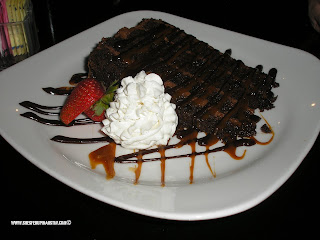