How do you "celebrate" turning 45 when your husband is out of town? Did you say "wait in line for an hour and a half for barbecue"? Well, so did I. If you knew hubby, TGFM (The Grumpy Fat Man), this would make perfect sense. First of all, Franklin is a legend in Austin, and I had not yet tried it. It's been on my bucket list since I started hearing the stories of lines for miles, hours of waiting, espresso sauce, and perhaps the best pitmaster to ever walk this planet. I've heard he doesn't actually walk, he sort of hovers over the earth and a gospel choir sings when he enters a room. Yes, I bought into it. Then again, I was sort of angry at them too. It was almost unattainable. Given the obstacles, I didn't think I'd ever get to try it. a) It's said the line is even longer on the weekends b) It's said you must get there well before they open at 11 am, c) Grumpy Fat Man doesn't like to wait in lines, he doesn't ever buy into overly-hyped food, and his motto is "Barbecue is barbecue" (something I didn't know before I married him. But, well, for better or worse.) What I needed was a free weekday, with a good excuse to treat myself, and no TGFM. The stars aligned today, January 12, 2012.

I got to Franklin and parked a block away. They do have a parking lot, and I might have been able to park closer, but there was a lot of construction and blocked roads, so I took what I saw. Time was 11:06. Temperature was just above 40 degrees. I was employing the polar bear plan. I'm from a little further north, and I've noticed Austinites start freezing when it dips below 70, so I was hoping this "frigid" weather would discourage some line-waiters. I arrived and the line was only out the door and into the first handicapped parking spot near the steps. I took a spot in line and counted. There were maybe 35 people in front of me. Everyone was bundled up in parkas. A waitress came out and offered to sell drinks (sodas or beer) to those of us in line. A man took his place in line behind me and started talking to me and the guy in front of me, who was a regular. I've never considered myself a social person, and I don't initiate conversations, but I found myself enjoying the "we're in this together" vibe. It made the time go by faster. The friendliness of people sometimes surprises me, in a good way. The Franklin expert in front of us informed us that there's a line once you get inside and it would still be another thirty minutes or so even once inside. Good to know. The line moves very sloooooooow, and it was about an hour before we got inside. But, at least at that point, we could see (and smell) the finish line.

While we were inside, the guy in front of me got a call from his wife and had to leave. He asked me for a favor. He gave me $40 to order a pound of brisket and a pound of ribs and have them put it back for him. I was to tell them it was for Gabe. I got near the counter and a girl in front of me had asked if she could get a half sausage. The cutter, Aaron Franklin himself, told her they couldn't do that because as soon as it was cut, it would start to dry out. I offered to buy the other half so she could try it, which worked out perfectly for  me because I'd been waffling on whether to order sausage along with brisket and ribs. When I told Aaron I needed to order for a guy I'd just met in line, he was like "what other barbecue place can you do that? Meet a stranger in line and order for them and share a sausage with someone else?" So true. We were like a little barbecue worshipping community at this point. It takes a village.

My order: Half pound moist brisket, half pound pork ribs, half a sausage link, a single serving of  beans, two kinds of barbecue sauce, and a small Texas pecan pie (made by Cake & Spoon), came to $22. All that, and I have a 45th birthday story that makes me smile.

So, was it worth it? Absolutely. The first taste of brisket was a surprise. You can taste the beef. I've had brisket I thought was divine, but the primary flavor is either smoke, or a heavy-handed bark of black pepper, which is good. But, this... this tasted like beef first, then you get the smoke and seasoning. Other moist brisket I've ordered has had bites of pure fat. I kind of like those bites, but this was a moist cut of brisket where the fat seemed to have been more evenly distributed or absorbed back into the meat. The tenderness was remarkable, especially since the brisket had travelled twenty minutes after cutting. It didn't seem to dry or toughen like some brisket will after cooling. The espresso sauce is truly special. It's more complex than any other sauce I've had, including non-barbecue sauces, like moles. I'm not sure I'd have known it had espresso if it weren't in the name. I kept tasting it, literally fascinated with the flavor, trying to employ my supertaster tongue to mad-science out the recipe in my mind. I'm still baffled. It was a tiny bit bitter, a hint of sweet, a little tang, and nothing like anything I've tasted. The first bite of white bread, brisket, and espresso sauce might have been one of the most perfect bites I've ever had. While I was in line, I watched a guy at a table put a bite in his mouth and close his eyes in a sort of reverence to it. I can see why. I will say, though, that even in small amounts, the espresso sauce kind of dominates the flavor profile, so I alternated in some bites with no sauce, to mix it up a bit.

I was about to take a picture of the meat and picked up a pork rib by the bone. The bone slid out clean. It was literal fall-off-the-bone tender. The pork flavor was delicious and the meat was melt-in-your-mouth good. I took the meat that had fallen off the bone and kind of shredded it with my fingers onto another slice of fresh white bread. While I had been in line, I'd watched a different guy at a table eating a rib with a knife and fork. Amateur! Anyway, I tried the regular sauce with this. I'm not sure what they call their sauces, but they have three: espresso, which is really dark; regular, which is tangy and pretty cumin-heavy; and a hot, which I didn't try. I liked the regular sauce, but it was something I could take or leave. I kept going back to the espresso sauce, then going naked (not me, the meat, but I was at home on my birthday, so you never know).

The only disappointments were the sausage and beans. I have rarely met a sausage I didn't like. <snicker>. However, I just plain disliked this. I don't know why, except that it tasted a little "off" to me. It reminded me of a venison sausage I tried once. Can pork sausage taste gamey? Anyway, my dog loved it, so no great loss. And I'm glad I didn't get a whole one. (Shout out to the girl I shared the sausage with!) The beans seemed to me to be a little undercooked and under-seasoned. The center had a sort of "dry bean" flavor. Again, no big loss. More tummy room for meat.

In the end, I had a great time standing in line. The Franklin folks were friendly and the barbecue was worth it. Oh, and I made about $7 for ordering for a stranger (sorry, Gabe, I tried to make them keep the change and give it to you with your order, but they wouldn't). Happy Birthday to me! 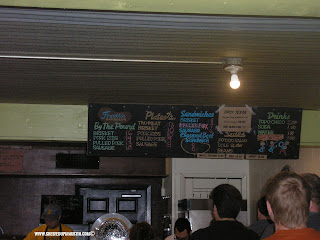 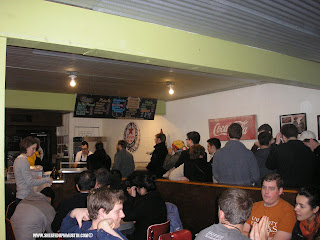 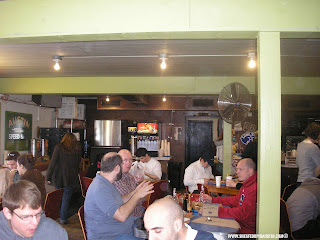 And here's the Hitler parody...