Pappadeaux always seems like a celebratory place to me. The first time I went to a Pappadeux was in Dallas, on a road trip with my best friend and my now husband (then boyfriend), the Grumpy Fat Man. We ordered lots of food and the place was hopping busy and we left super full and super happy. I guess that's why when I've been back to the Austin Pappadeaux, I keep expecting that same happy high as before.

I had to laugh when were were seated, the host told us "here are the drink specials and appetizer menu if you'd like to look at those. Otherwise, enjoy your meal." Otherwise?  A rather odd choice of words, but ok. I can't say it's grammatically incorrect, but it sounded like a dare.

The scene isn't as festive as I imagine it should be. There's no music, which is something I've been acutely aware of recently.  Sure, it's no fun to be yelling over the din of loud pop and noisy crowds. But, in the absence of music, what you hear is the clatter and clink of dishes and glasses from the kitchen. This gives it an odd "hotel restaurant after its glory days" sound. Or, as the Grumpy Fat Man called it, "almost cafeteria". In either case, it lent a rather dated feel, one that was almost sad. Add to that the dated valances over the window casings and dated chairs at the round tables down the middle of the restaurant and you get, well, overall "dated". To further add to the dated feel of the place, apparently there was an ill-fitting suit convention going on where the average age was 93. One gray hair flew onto my plate as the gray hair parade passed by. Odd confession time, I do love the gaslight flickering lanterns as decor. Must be a remnant from a past life.

If the restaurant is going for upscale, then the customers sure aren't buying into that. Personally, it was a Saturday afternoon and we were in jeans and t-shirts, so I'm not trying to complain that people weren't dressed for high tea. But, there were six men at different tables all keeping their ball caps on throughout their meals. And one young twenty something girl appeared to be having lunch with her mother, who should have told her that a bathing suit top and grey sweat pants were not a look to be rocked, especially with bed head. I guess my point is, it's comfortably casual, but the prices beg to differ.

The wait staff are in white oxfords with a black vest and red tie. It's faux upscale and just needed a bunch of "flair" to make it Tchotchkes from Office Space. They are attentive and friendly. Our $3 iced teas stayed full.  A fresh warm baguette was brought out promptly on a sterling tray with a sterling dish of fancy whipped butter. It was flaky on the outside and made the proper mess of bread crumbs on the dark wood table.

We were there at lunch time and, even on Saturdays, they have lunch specials. I checked out the main menu first and anything that jumped out at me was at least $20. Since I start having palpitations at that entree price (except for special occasions), I turned back to the lunch specials. My husband found the winner before I did. He pointed and said "you want this". Blackened Costa Rican Mahi with lump crabmeat, lemon butter served over creamy cheese grits with andouille ($13.95). Yes, I want that. I asked him why it was only Mahi, not Mahi Mahi? Is that because it's a lunch special? Do I only get half a Mahi Mahi? He answered, "you're just getting the left half". He ordered my usual, the fried seafood sampler with shrimp, crawfish, tilapia and french fries ($14.95).

I enjoyed my blackened half a Mahi Mahi, but the lump crab meat over the top tasted too much like canned tuna. As I type that, I accidentally typed crap instead of crab, freudian slip? The blackened seasoning lacked heat, but heat was surprisingly found in the creamy cheese grits, even in the bites without andouille. I enjoyed the flavors together and would order this dish again. The best bites were the grits that had absorbed the blackening seasoning where the fish was laid on top. Those were pure gold.

Hubby enjoyed his fried seafood platter, but we couldn't avoid comparison to Razzoos, a more festive and laissez les bon temps rouler kind of place. We think Razoos is the same price anytime, not just lunch special, and we think you get more food, although Razoos fish is catfish, not tilapia. Both places know how to cook seafood properly, no rubbery shrimp, fish moist and flaky. Both places season their fried foods well and with thought so that each offering tastes different.

We ended our meal with my favorite "dated" tradition, picking from a dessert tray. I wish more places would bring back the dessert tray. We have previously had their praline pecan cheesecake (wonderful) and their bread pudding (also good). This time we went for the giant turtle brownie a la mode. There's no way you can go wrong on desserts here. We ended up a few pounds heavier and $60 lighter (no alcohol), which would have been twice that if we'd gone at dinnertime or for a celebration. I think that's what makes me feel critical of Pappadeaux. This was $60 for iced tea, one side salad, two entrees and a dessert. Not a celebration or fine dining experience. It made us question if it felt like a $60 experience and we both agreed it wasn't.

Walking out, on the patio, some lively new orleans jazz was being piped in. That would have made a world of difference inside. 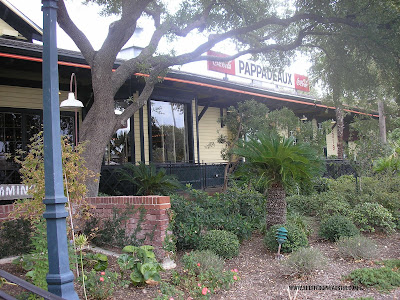 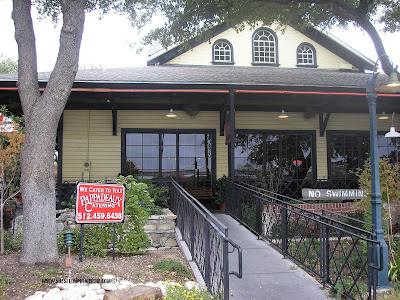 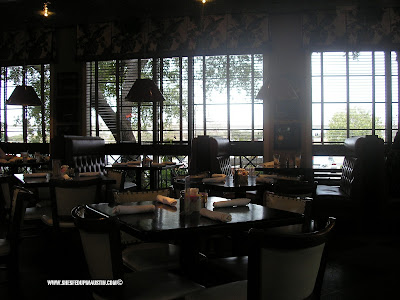 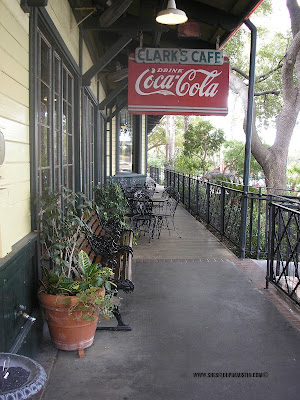 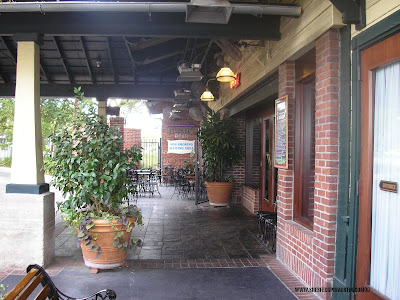