Rudy's - The Worst Bar-B-Q in Texas

There's something about Rudy's. They proudly display their signs that say "The Worst Bar-B-Que" in Texas. But, we know it's tongue in cheek and Rudy is laughing all the way to the bank. They are a chain with around thirty locations mostly in Texas, but with a few in Colorado, New Mexico, and Norman Oklahoma... (Oklahoma? Get a rope.) Just kidding. I'm from Oklahoma and have been met with that same sentiment when divulging that secret to a Texan. Rudy's hasn't made it to my home town of Tulsa yet, but when my parents visited, we took them to Rudy's.

If you hate Rudy's, you are buying into the foodie propaganda that you must stand in line for hours (or hire a line walker) in hopes your barbecue won't be sold out before you get your order at Franklin, or that you must get up at 6 am on a Saturday morning to drive to a town almost two hours away that sells out by 10 am. In other words, according to many foodies, if you don't want to work for a barbecue breakfast, you might as well be eating a McRib. Yeah, I said it. Truth is, there are perfectly normal people who actually like Rudy's and have done some of the barbecue pilgrimages, but still want to be able to get barbecue in town and on a whim, and some time after 11 am. Rudy's is just fine for that. In fact, Rudy's is really better than just fine. I'm just not going to tell a Chowhound that. I might as well enjoy easy-going barbecue and leave all that work to others.

I have Rudy's down to a science. It took awhile to find my sweet spot. The first several times I had too much meat, and had not yet discovered the cream corn. Firstly, they do call it "cream corn", as opposed to "creamed corn" and this is nothing like the broken down kernels of corn in a can you've been served when visiting some other kid's Grandma's house. This is sort of like whole kernels of corn in a sweet pudding. I could bathe in this stuff. Someone I work with calls it "crack corn" because it's so addictive. She also sings "Jimmy Crack Corn" when she eats it, so maybe there's actual crack in it. If so, they must be getting a really good deal on crack.

So, like I said before, it's down to a science. They keep the line moving quickly and the employees are trained to be upbeat and they always nail it. You will be asked if you've been to Rudy's before, although when they see us coming, they act like they recognize us. Maybe they actually do. If you haven't been, they announce they have a "rookie", but they go that extra mile to explain their process and will offer samples and point out where everything is. It's nice and not too embarrassing. They put everything in a milk crate for you to carry to your table. You order your meats by weight. Your "plates" are strips of shiny-coated butcher paper. My standard order is now 1/4 lb moist brisket, small side of cream corn, small side of beans, and a soda. My husband goes all meat, with 1/2 lb lean brisket and "half hottie" (half link of jalapeno sausage). They give you a giant handful of fresh white bread and you can go back for more bread if you need it. There's plenty of "sause" waiting at each picnic table for you. There is seating inside and out.

Once we've gotten our sodas (hubby gets excited they have some soda called "Red Flash"), we get down to business. I take my 1/4 lb of moist brisket, put it between two slices of white bread and pour a bunch of "sause" on. After placing the top piece, since I've saused it so well, I now cut it into cute little squares and eat with the plastic knife and fork. I've already told you how much I love the corn. I actually found that the internet claims to have copycat recipes for Rudy's corn, but I haven't tried them. I love how you can ask the internet just about anything anymore. I did ask one of the counter guys about the beans. As with their sause, they are heavy on the black pepper. I asked if the beans had some of their sause in it, and he said he thought they did. He also gave away a couple more secrets. He said he thought they seasoned it with some of their dry rub and then added their spicy chopped beef. The result is a side that goes really well with the brisket. The moist brisket has a thick peppery bark and is truly moist. Every meat is cut to order and you can watch them on the "cutter cam" when you walk in. Rudy's was my first taste of Texas BBQ, and I wasn't sure at first if I liked the vinegar / black pepper tomato-based combination for sauce. I was raised on ribs and sweet sauce, and this is really good, but really different. It grew on me to the point I think I'd miss it if I moved away from Texas.

Like I said, Rudy's is friendly, predictable and familiar, and has a good sense of humor about themselves. How can that be "the worst"? Here's hubby's review of Rudy's, where he tells a story about the barbecue / wine experiment we did once. 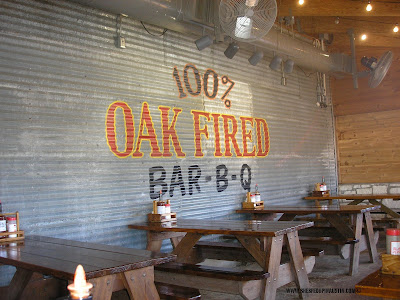 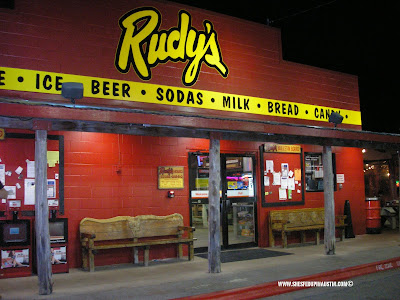 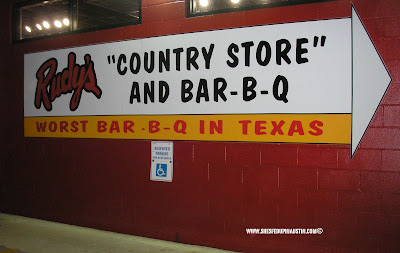