I'm gonna have to keep it real, y'all. I thought I'd like this place so much more than I actually did. For one thing, maybe I missed their most special dish. They seem to be famous for their pork chop. From their online menu, it appears to be a special served all day Tuesday and Wednesday. We were there on a Friday, so I hadn't held my breath it would be available. But, I was still frustrated when we were seated and told immediately, "we're out of oysters and pork chops" (at about 5 pm). Ok, I shook off my outrage at not being able to have oysters (said sarcastically), but couldn't shake the befuzzledness of whether or not you could actually normally get the famous pork chop on a Friday. If anyone knows, please let me know, I may go back for that.

So, nevermind the chops, I decided I was feeling a bit crawfish. I said that, of course, and the Grumpy Fat Man, aka my husband, said "I thought you were feeling crabby". Ba dum dum dum. So, he must have been feeling brave. Anyway, it was a rare Friday off at happy hour time, so we decided to begin with cheese fries. They are half price during happy hour, but they charged me to add bacon. Seriously, you can't have cheese fries without bacon, so it had to be done. The holy trinity of foods is potato, cheese and bacon. And ranch dressing is the icing on the holy trinity cake. These cheese fries were ok, but I've had better. They will satisfy the craving, but the fries are Ore-Ida or some other frozen variety. They had plenty of cheese and the bacon was nice and crispy and salty. The ranch dressing was thick, like I like it, but had that "bottled dressing" tang that I don't care for. Also, when ranch dressing comes from a bottle, it seems to leave an odd coating on my tongue. Or am I just a freak? Anyhoo. (Be it known, I never say "anyhoo" in conversation. How does it find its way into my blog? I don't know.)

So, then came the entrees... aka more fried stuff. Hubby had a chicken fried steak sandwich. He liked it ok, but said it was overly gristly. I had the crawfish basket. This is where it kind of falls apart. The crawfish were fine. Only a couple tasted "off" which happens with crawfish. But, they didn't seem to be seasoned at all and were coated in pure corn starch. I know corn starch is great for frying lighter and crispy, so the first freshly fried bites seemed perfectly crisp, if not well-seasoned. But the corn starch seemed to disintegrate quickly and became chalky on my taste buds. And the crawfish hadn't been drained well post-frying, so the crispness they gained from the corn starch was cancelled out by the grease pool they were soaking in. They weren't terrible, but they were $9.99 for a heaping basket of crawfish and a few hushpuppies (ruined for me by the presence of little green bits). Elsewhere, like Razzoo's, a crawfish basket is equally heaping, but also has fries (which would have been fry overload on this day) and the crawfish are seasoned better.

What I did love about Shoal Creek Saloon, and what will bring me back to order something else, is how laid back the atmosphere and how the rustic kitsch just seemed to work. Our booth had an autographed John Wayne photo, the place is packed with New Orleans Saints stuff and other cajunphilia, and they have a shuffleboard. What's not to like about that?

From their website, see if you can spot the misspelling. Someone had a few too many Abitas, or is this on purpose?...

Come Spend Austin's Beaufitul Autumn Days on Our Patio
by the Creek, Under Our Fans
Hey, It's Texas, Weather Changes! 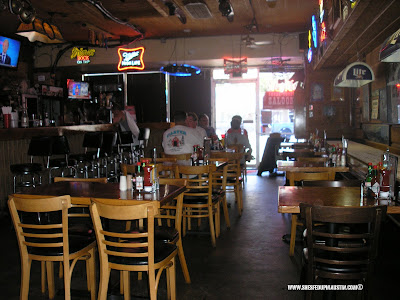 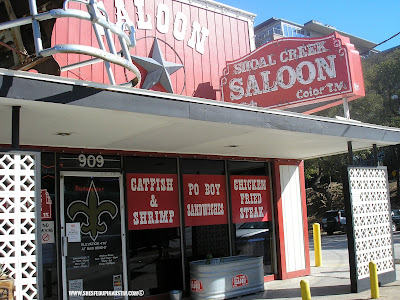 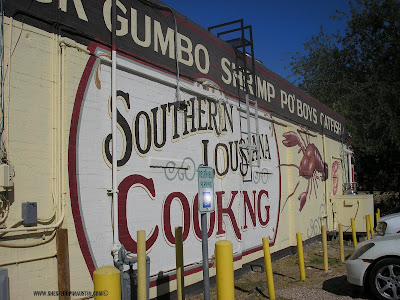