What a cute place on Main Street Round Rock. I'm a bit of an anglophile. Oh, and in case you didn't hear it, I just typed that last sentence with a bad British accent. Anyhoo...

We found ourselves up early on a Saturday morning, which never happens. And even when it does happen, the other thing that never happens is that we feel like getting out and about early. But, once in a blue moon, it happens. So, Saturday morning, feeling a bit peckish (can't stop with the accent now, can I?) We decided to motor on up to Round Rock for a wee bite. Oops, that sounded Scottish, sorry. As a side note, many of the online reviews mention a lovely owner with an English accent. She wasn't there  this morning, but we were served by a nice Texas-accented woman.

Friar Tuck's offers some specialty roasted coffees in a French Press. That seemed the thing to do. Hubby and I shared a half pot, which was about one and a half cups each. We chose the Maui Yellow coffee bean. I say about coffee what someone once said about art, I don't know much about it, but I know what I like. This was good. I added real cream because it was there. The only time I use cream in my coffee is at a restaurant, but it's something I always do. They also have sugar cubes. Actual sugar cubes that were irregularly formed, so I know they weren't the kind I have in my pantry now that came from HEB. Once I doctored my coffee, it reminded me of Brach's coffee candy (which may be a travesty to the integrity of the bean, but I liked it). Once I started thinking about coffee candy, the place reminded me of Grandma. And my grandma wasn't British, she was Kansan. But, my coffee with cream and sugar reminded me of her. And the smell of coffee brewing and good simple breakfast reminds me of Grandma's house.

We ordered food with our coffee. Hubby, the grumpy fat man, got a sausage roll. I had a bit of food envy over this item. The sausage inside wasn't breakfast sausage flavored. Nor was it bratwurst flavored. It was mild, but flavorful. Just the right amount of porky fat. Wrapped in a flaky croissant-like blanket. Yum. He had to stop me buying a bunch "for the road". I had the bacon buttie. It's a simple bacon sandwich, but it was amazing. I had it on the wheatberry bread. That was some of the best sandwich bread I've had. I asked about it and was told it's made offsite from the owner's own recipe. I had thoughts of going Mission: Impossible and stealing the recipe. It's buttered and toasted and served with really good bacon. The bacon was actually pretty simple and old-fashioned. I can't describe it, but it had me thinking about Grandma again. We each got a side of scrambled egg. They only scramble, they won't cook it any other way. It was fluffy and cooked in real butter. I like eggs and butter.

To feed our sweet tooth, we ended with a shortbread cookie and a cinnamon muffin. I dunked my cookie in my coffee. That's what I would do at Grandma's house. It was tasty. The muffin was especially good. Probably another top secret recipe. We thought it had a little lemon zest in it, maybe? Something that added a fresh, light taste to it.

Ok, now for part two of the review. If you are a mother who thinks her small child is an angel and is perfectly-behaved in every restaurant you go to, please stop reading now. Because here's the thing. We got to Friar Tuck's early enough in the morning that we and the other patrons were enjoying a very nice, leisurely breakfast. There's no rush here. In fact, one of the older gentlemen eating there may have been reading an actual newspaper. Then, just before we left, about the time I was dunking my last bite of shortbread in the last drops of coffee, it happened. Some small child let out a banshee wail that curdled the cream on our table. See, there's a play area at the back of Friar Tuck's, which in theory, should entertain the banshees while the parents sip coffee and tea. But that's not reality. Not only that, a whole noisy brood of them were entering as we were paying at the front register. I've got nothing against kids. I just don't like parents who don't hear their children. Now I see why half the Yelp reviews raved about things like the play area and changing station in the bathroom. This is apparently a mecca for moms whose children possess dog whistle-like abilities. Yeah, I know that makes me the dog in this analogy. 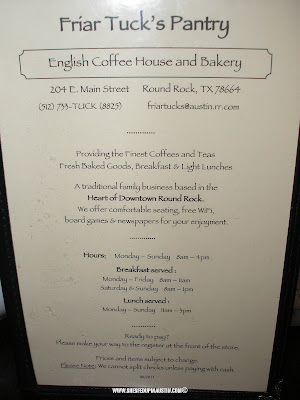 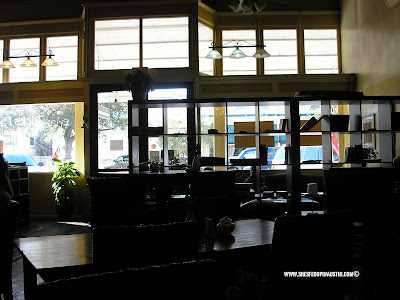