Serranos isn't someplace I get excited about, but it does satisfy. They are an Austin chain with six locations that serve the standard Tex Mex comfort food, cheesy enchiladas with chili gravy, as well as a twist not offered at all Mexican restaurants, mesquite grilled fajita meats. You can smell the mesquite when you walk in. We end up there more often when I've worked late and need someplace that's still open past 9:00 pm on a weeknight and we don't want fast food or a loud bar. And while I can't quite rave about it, it always manages to hit the spot.

I'll give Serranos bonus points for being extremely reasonable. On our last visit, it was "enchilada night", which is what I was planning to get anyway. The special tempted my husband away from his planned crispy tacos, but we saved $8, so he was swayed. I think it was a Monday night. Their specials vary, but they have good deals on weeknights.

The enchiladas are the ooey gooey cheesy melty chili covered traditional Tex Mex style found all over. Serranos enchiladas are hot as the sun when they come out, and the corn tortillas get a little crisp at the edge, while the rest of the plate pools with the chili con carne. I love when I get extra chili con carne, so I can use it to spice up my rice. They also give you three choices of beans to accompany the meal.

On other occasions, I've ordered the Texas tacos, which are made with slow-cooked brisket smoked with mesquite, then served with grilled onions in a flour tortilla that tasted almost fried, like a chimichanga. I liked that added touch. They serve them with a chipotle BBQ sauce. Use this carefully. It is hot.

Recently, I ordered the Tacos Tulum, which are griddled corn tortillas with achiote-marinated pork and avocado. I had them leave off the pico de gallo. First, I need to remember "achiote-marinated" isn't as flavorful as it sounds. In fact, achiote mainly adds that orangey color to meats, although I have had some achiote pork elsewhere that was seasoned well with cumin and salt. I also need to remember not to say "Bless You" when someone says Achiote. The Tacos Tulum at Serranos were a bit of a disappointment. My husband asked "is that as dry as it looks". It wasn't really as dry as it looked. But, it was bland. I think they had slow cooked the pork, then cut it into pretty big pieces, then deep fried each piece to get a crisp coating. This gave it a dried out pale appearance. On a night when I wasn't in the mood for heavy and greasy, it worked fine. But, I don't expect to crave this dish again. 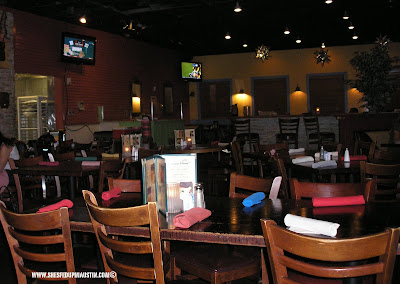 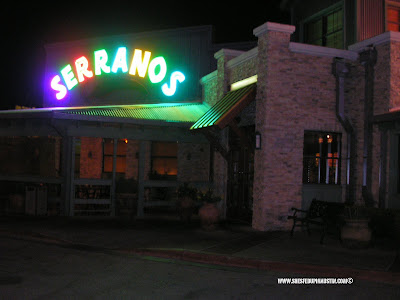 Click here to read my husband's blog, Bold Talk From a Grumpy Fat Man, about Serranos.