Hyde Park Bar & Grill is an easy place to go. They have a menu with a little of everything. It's casual and family friendly. I actually prefer the original location in Hyde Park to the south location on Westgate, but the south location has a bigger parking lot and more seating, so we probably end up there more. The original location just has a little more character, in my opinion. Perhaps I just like the giant fork.

I've ordered quite a few things from their menu that I've enjoyed. But, after eating around the menu a little, I now seem to gravitate back to the dish that has become synonymous with Hyde Park in my mind, "The Horseshoe".  This is a piece of Texas toast with a grilled half pound burger, topped with cheddar cheese, then smothered with their cheddar cheese sauce, then piled high with Hyde Park's famous french fries, then smothered with more cheddar sauce. They top it with diced tomatoes and scallions. But, I have them leave off those pesky little healthy things. Then, I ask them to add bacon and bring a side of ranch with it. This is seriously the way to order it. To be fair, "The Horseshoe" is truly greater than the sum of its parts. My first was a much better burger. They still get it medium rare like I ask, but there's been a noticeable decline in the meat quality. The fries are a special Hyde Park preparation. They hand cut the potatoes, soak them in buttermilk, then coat them in flour and fry them. The fries are well-known, but I think this preparation is best when they first come out. After a short time, the fries aren't as crispy and the coating begins to weigh them down. Also, when I've had the fries as a side without the cheddar sauce, they usually need salt. As for the cheddar sauce, I suspect it may start with a flour roux, and sometimes I think I taste the flour. It is still much better than canned nacho cheese, but sometimes it's a little, I don't know, glue-y? This time I noticed a bit of a paprika flavoring it as well, but I didn't recall that from before. As harshly as I'm criticizing the components, they really come together in a meal I tend to overindulge on. (Oddly enough, I have never been able to finish a Horseshoe, no matter how hard I try.) Don't forget to ask for ranch with this. They have particularly good ranch. And add bacon, because bacon makes everything better. I think Benjamin Franklin said that, didn't he?

Ok, so there are actually other menu items, and maybe someday you'll want to go to Hyde Park twice in a row... it could happen. On Mondays and Tuesdays at the Westgate location only, they have fried chicken from the recipe that was famously used at the now closed Tony's Southern Comfort restaurant. I ordered this once and loved it. Plump, juicy fried chicken on the bone that had been buttermilk brined and fried crispy, but it was a light batter and a thin crisp to it. I had more than I could eat. Some time later, my husband ordered it and was given two small pieces and his was greasy. We haven't sampled it again, so I'll just say that when it's good, it's really good, but it must be inconsistent. Another hit was their chicken fried steak, which was tender Kobe beef and didn't try to be plate-sized like some places. This resulted in a higher quality CFS, at least in the quality of meat. Although, I'm not sure that wasn't a special, because the menu doesn't identify the CFS as Kobe. Another hit was the Fried Egg Sandwich, which they offer anytime, not just brunch. What I liked about this was that they seared the ham, which really pumped up the flavor, and they piled it on. I will say that some bites were almost too hammy. But, I'm not always the biggest fan of the ham. Now, bacon on the otherhand... oh sorry, daydreaming about bacon for a moment.

On this most recent trip, we had a Groupon. And when we have a coupon, we like to splurge a little and get dessert. This one was a decadent chocolate layer cake. They had me at "dark Belgian chocolate frosting". (How, you ask, can I tell they used Belgian chocolate? I can't. In fact, I think I was just sucked in by those magic words. Nevertheless, it was delicious). 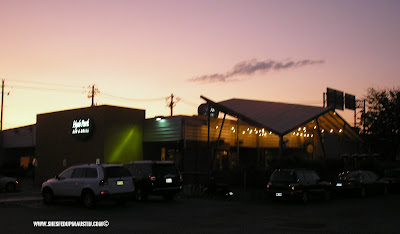