If you haven't been to Gourdough's, forget anything you think you know about donuts. This place redefines donuts.

I first went to Gourdough's first in March of 2010. They'd been open less than six months, but I had been planning a trip there since I heard about them... even before they opened. The thing about being married to a Grumpy Fat Man is that it's hard to get him excited about eating outside at a picnic table. It's hard to get him to drive to South Lamar. And it's hard to get him to any place he perceives to be trendy or over-hyped. This was a nice cool evening and we each ordered a donut, then sat at a picnic table and waited and enjoyed the crisp evening breeze. Grumpy became grumpier and grumpier as time wore on. Grumblings about waiting thirty minutes for a donut made small talk difficult. He said almost nothing while eating his donut, except to comment that they "just throw stuff on them, they aren't filled or anything". I thought to myself, this is probably the last time I'll get to eat here.

That first time, I had chosen to "make my own" with brownie batter, caramel and pecans. The nice guy at the window said "don't you want a frosting?" and explained that the batter was a filling. So I went with fudge frosting. The donut itself was much like a funnel cake. It was cake-ier than I expected, being more accustomed to raised donuts. The funnel cakeness sort of fought with the other flavors. I should have gone with fewer flavors, but oddly enough also thought each of the flavors could have been more... the fudge could have been fudgier. The caramel could have been more caramelly. And I probably wouldn't add the brownie batter again, since that's exactly what it tasted like, but it wasn't as rich as I expected, it was just like batter. Unlike the Grumpy Hubby, I didn't have a problem with everything being on top. You're going to get all of the flavors in each bite whether it's filled or topped. They are super generous with the toppings. I wonder if anyone ever goes there and orders a dozen for themselves. I wonder if the nice guy at the window silently laughs. Just one of Gourdough's creations will put even a sugar fiend like me in a sugar coma.

Anyway, imagine my surprise when my grumpy husband woke up recently and said "I want a maple donut with bacon bits sprinkles on it."

The voice in my head: "Really?" (Because the only time I've seen him eat a maple donut was when he was stealing mine.) But instead of reminding him of the burgled donut incident, for which he paid a high price, I just said "You want Gourdough's?"
He said "They have that?"
I said, "well, it's not bacon bits, it's whole pieces."
In unison: "Even better".

Walking up to the airstream, I had to endure some really bad punk rock music. The particular track sounded like a thirteen year old girl singing about wanting to be a unabomber. It turns out it was early The Donnas. (I had to look it up). Aside from that, we were the only customers at the time and again, the guy was really friendly (being over a year later, I don't know if it was the same guy). Grumpy got The Flying Pig. (Thank you to my hubby's friend Chris for posting the inspirational bacon bits donut from Cali, so we had to one-up him with the whole hog.) I got one bite of his and it was delicious. I got the Heavenly Hash, which on the menu was a donut with fudge frosting, marshmallow and "fudge candy" on top. I actually didn't find any "fudge candy" on top, but it was oddly topped with  Oreos. Well, actually, as Grumpy pointed out, they didn't have the Oreo brand stamped into the cookie, so they were un-Oreos. Or "Faux-reos"? (Do they still make Hydrox? My grandma always had some stale Hydrox at her house. And stale fake oreos are perfectly fine when dunked in milk.) Although, I didn't think the Fauxreos went well with the other flavors of the Heavenly Hash, so I ate those separately. I liked my donut much better this time, possibly because it wasn't preceded by thirty minutes of Grumpy Bear? Nonetheless, it was decadent. Delicious. And I couldn't finish mine. Sadness. 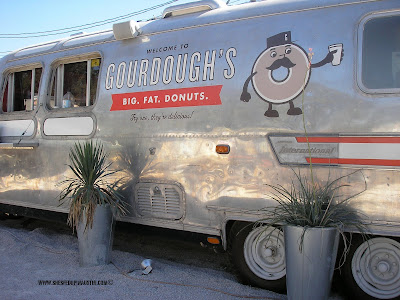 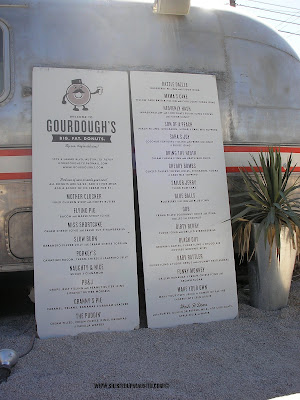