There are a few things I love, no matter how cheesy... potatoes, Bavarian kitsch, and restaurants in old buildings.  With the promise of all of my favorite things, Scholz Garten should have warmed my cheesy little heart. (And yes, if you are near me now, you're hearing the chorus of "A Few of My Favorite Things" from the Sound of Music. It didn't let me down on these points, but I wasn't exactly singing when I left.

Scholz Garten was established in 1866, and there's plenty of history inside those walls. Now the memorabilia is hanging in between flat screens, and it's a popular place to have beers and watch the Longhorns play. We went on a summer Saturday afternoon so to avoid the raucous sports enthusiasts and just enjoy food. We parked easily across the street at 1610 San Jacinto in the state parking garage. There wasn't a charge for parking, but I'm assuming this might not be the case if there were events going on, or if it were a weekday.

To be perfectly honest, my expectations were low, knowing this is now owned by the same owners of Green Mesquite, and having read reviews raving about drinking beer and watching games. The menu is mostly barbecue, a few German dishes, and standard fried pub food. Most reviews forewarned not to expect authentic German schnitzel, which was fine since I prefer my German comfort foods when the temps aren't in the hundreds. We started with a  half order of that German specialty... potato skins. Theirs were better than TGI Fridays, but not the best I've had. There was a Irish pub in my hometown that is gone now, but it set the bar pretty high for potato skins. My husband ordered a two meat plate with brisket and grilled bratwurst. The barbecue plates came with two sides, and he ordered sauerkraut and potato salad (we thought he was ordering the German potato salad from a 100 year old recipe, but he got regular company picnic potato salad, so be specific when ordering). He liked the brisket, but found the bratwurst bland. I tried it, and concur. It also had a strange "twang" I couldn't put my finger on, and wasn't as fatty as traditional brats I've had in our neighboring German communities. I ordered their one meat plate with mesquite smoked wings and pinto beans and corn. The wings are normally served in their hot wings sauce, but our friendly waitress let me know I could get them plain and add the barbecue sauce, which was how she liked them. I did actually prefer their barbecue sauce to a hot sauce, but that may be a completely personal preference.

We did end the meal with a piece of fudge pie. This is a hot gooey brownie baked in a pie crust. It was rich and kind of crispy (my husband translated that to "dry").

Now for a bit of a math lesson. The 6 wing appetizer was $4.95 and each side was $1.99. The 1 meat bbq plate was $9.20 and came with three wings and two sides. So, by my calculations, Scholz owes me three wings and 27 cents. Which is why I wasn't singing about my favorite things when I left. 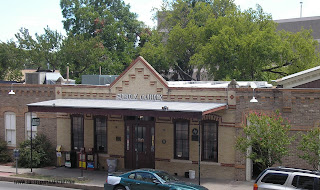 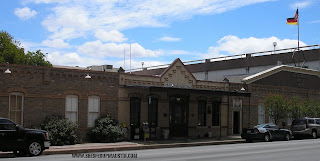 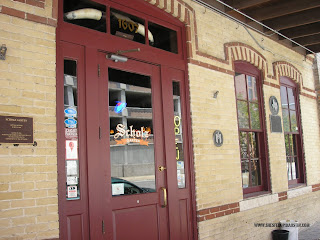 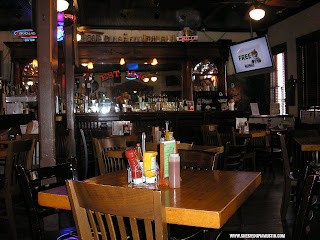